Almost half of adults would avoid intimacy with people with eczema

People with eczema pay a heavy price for their skin condition when it comes to intimate relationships, according to an independent new survey.  Almost half of the men polled1 confessed they would find angry looking or flaky skin a turn off when it comes to getting up close and personal with a partner.  Whilst 42 per cent of all respondents reveal that the inflammatory skin condition would put a halt to any new romance.

The research, conducted by Gorkana on behalf of Intrapharm, makers of Aquamax emollient cream for inflammatory skin conditions, shows that almost half of those polled face crushing embarrassment about their skin condition.  This prevents one in five men with eczema actively seeking dates; a similar number would avoid taking a public-facing job; and the condition stops almost a quarter of women from wearing revealing clothes.

Although 12 per cent confess that their raw rashes have often stopped them from leaving the house, this does not mean they are shielded from torment –12 per cent of 18-24 year olds admitted they had been victims of ‘trolling’, attracting online abuse because of their skin condition.  Both men and women of all ages have been victimised – over a fifth experienced bullying and name-calling.

One respondent confessed: “I suffered from very bad eczema for a while and know how bad it feels when people recoil from touching you because of something you can’t help.”

Shockingly, 3per cent have even had suicidal thoughts as a result of their condition.

According to the British Skin Foundation, 60 per cent of British people currently experience – or have experienced – a skin disease at some point during their lifetime.   This is borne out in this latest research which showed that 69 per cent of the general public surveyed either has eczema themselves, or know someone who has the condition.

Fitness blogger Carys Gray is one of them. Stripped of make-up, she recently took to Instagram to demonstrate the harsh realities of what atopic eczema can look like.  With more than 145,000 followers on the photo-sharing platform, she revealed that perfect and flawless skin on social media is not always a truthful image.

Atopic eczema is a very common skin condition, which may start at any age but the onset is often in childhood. While 1 in 5 children in the UK is affected by eczema at some stage, it can also start later in life in people who did not have it as a child.

It is distressing therefore to find respondents to the Intrapharm survey shows reluctance by a fifth of parents to allow their children to play with a someone with eczema , with a third of respondents believing that those of us with the skin condition are ‘potentially contagious’.   Whilst older isn’t necessarily wiser, seemingly, with half those aged 55-64 fearing the individual could be pose a risk.

The survey also reveals that a fifth of us are under the misconception that eczema is a result of poor health, with this figure rising to 30 per cent among 18-24 year olds.

According to Intrapharm, which commissioned the survey, its Aquamax emollient cream offers a cost-effective solution for people experiencing inflammatory skin conditions, with a price comparison suggesting that prescribing Aquamax could save each of the 220 NHS Clinical Commissioning Groups up to £300,000 per year, freeing up vital funding they could invest in other priority areas.

The new sodium lauryl sulphate (SLS)-free Aquamax Cream is a leave-on emollient for use in eczema, psoriasis and other dry skin conditions. It has been specifically formulated to exclude common irritants found in so many other emollient treatments. With a high lipid content, it provides an effective barrier that stops moisture escaping from the skin and prevents irritants entering.

According to Dr Brown, a GP based in Litcham, Norfolk, he has seen first-hand the benefits of Aquamax in his patients, as he commented: “Eczema has an ability to cause distressing symptoms and it is great to have found a great emollient.  Aquamax is very well tolerated and highly effective. Since September 2016, it has rapidly become our practice’s number one emollient cream due to its effectiveness, popularity with patients and cost effectiveness”

This is corroborated in a recent survey conducted by the company amongst eczema patients, which revealed that 83 per cent preferred using Aquamax to their usual emollient cream (including E45 and Aveno) with a 94 per cent success rate in addressing their skin condition and reducing itching for 87 per cent of those questioned.

Aquamax is available over the counter and on prescription.  To request a FREE SAMPLE please visit www.aquamax.co.uk.

The AquaMax Emollient Range is now available at Helloskin from £2.98 for 100g and £6.98 for 500g. To order from Helloskin please visit:   Aquamax Cream for Dry Skin Conditions (Eczema & Pso

We are delighted to announce AquaMax Emollient Cream is now available in Poundland Stores nationwide. 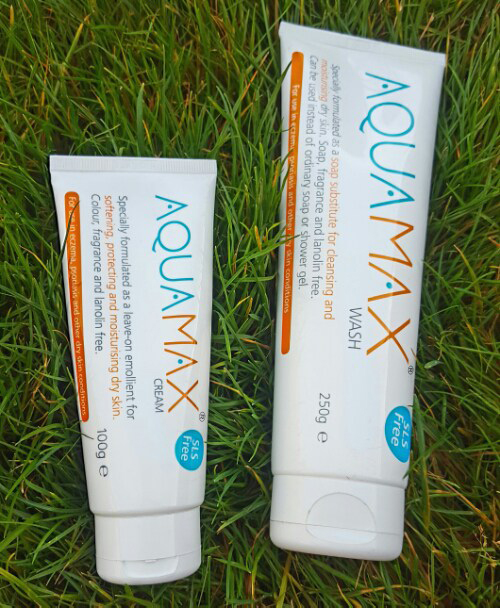 Blogger Review: How to Look After Your Skin this Winter featuring Aquamax

The weather in the winter months can be so harsh on our skin. Skin problems such as eczema and psoriasis can flare up and make us feel generally miserable.